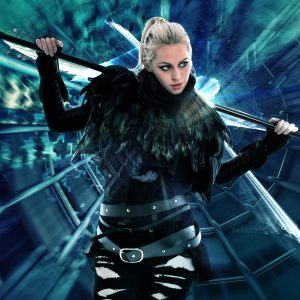 “You’re cheating!” Darryl Donovan shouts. He throws his cards on the table with the kind of fury I’d expect from Thor.

I’m all about Gunnar Magnusson, but I can’t deny Darryl Donovan’s hotness as he leaps out of his chair, his boxer briefs stretching tightly over his firmly toned thighs. He turns before I can get a gander at his front package. Not that the back view is a bad. Damn, his butt cheeks are aces high as his brown skin ripples under the white fabric. I won’t even comment on those abs. Or biceps. Or deltoids. Or—

“I agree,” Alex chimes in. He’s still wearing his shirt, but not for long if my hand holds.

I smile over the tops of my fanned cards. “Now how would I possibly cheat? You know I can’t lie.”

“Cheating isn’t exactly lying, though, is it?” Gunnar Magnusson asks.

It’s all I can do not to stare at his chest. Or the fair hair dusting it. Or the long blond waves caressing the pecs that twitch every time he moves. I slurp at the drool leaking from the side of my mouth and refocus on my cards.

“I find it both curious and amusing that Loki hasn’t lost a stitch of clothing in all of this,” Freddie comments with a swirl of his WeedPop across his tongue, which seems to be permanently dyed red.

“Yeah. Right,” Freddie says. He went straight for the loincloth (don’t ask) and underwear when he lost the first two hands. He hasn’t lost any since, nor has he gotten up from the table. I plan on giggling hysterically when he does, regardless of what he’s packing.

He’s still mad at me for that … thing.

“I learned from the best.” I blow Freddie a kiss. He catches it with slow-reaching fingers and gobbles it up. Maybe he’s not as mad at me as I thought.

His rage comes and goes.

“Something tells me there’s more to her winning than just poker training,” Gunnar Magnusson says and tosses his cards face down on the table. “Fold.”

I pout. “Damn, I was hoping you’d stay in so I could see what you’re sporting under those jeans,” I tease.

“Bluff,” Alex says under his breath.

I wiggle my shoulders. Just a little. “Call and find out.”

Darryl Donovan returns to the table in a huff and points at me. “She does do that shoulder thing every time she bluffs. Take her out, Alex. I want to see Loki destroyed.”

I shiver at the underlying threat. Being mortal in the presence of utter badasses—even mostly naked ones—can make a former god like me a little twitchy.

Alex considers his hand. Quirks his head. Seems to think some more. Finally, he lays his cards face down. “I think you’re full of shit, but I value my clothing too much for this. I’m out.”

Freddie straightens, a gently curled brown lock falling into his eyes. He tosses a wad of fake money into the pot and nods to my chest. “Call. I want the shirt.”

He spreads his cards on the table: two, three, four, five, and six of clubs.

I don a defeated expression and sigh. “Freddie, you’re the king.” I start to pull my shirt up. Then I pause, rearrange my cards, and plop them down one at a time in order: Ace of spades, ace of hearts, seven of clubs, seven of spades, and seven of diamonds. “The king of losers!” I cackle.

My friends groan in unison and fall back into their chairs with disgust.

“The player has been played,” Freddie says as he tugs his shirt over his head and throws it into the pile on the floor. He gets up, buck naked except for a pair of knee-high sports socks with pink rings around the top, and declares, “Loki wins the universe. Let’s celebrate with a sausage party.”

Amid hoots of laughter, I barely notice Freddie’s dangly bits. Because Gunnar Magnusson is wriggling out of his jeans.

Oh my gods, Freddie’s right. I did win the universe. And Gunnar Magnusson is the raisin at the end of my sausage.