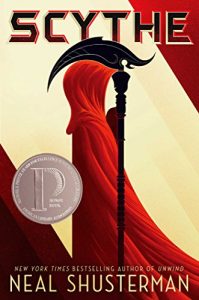 I keep claiming I don’t like YA books. Apparently, I’m a big ol’ liar. SCYTHE is just the latest in a line of recent YA stories I’ve read that have dragged me kicking and screaming to the Dark Side. 😂

Full disclosure: I listened to the Audible version of this book, so I may have some proper names misspelled. My memory can be sketchy on exact terms too. Apologies for any errors in advance.

I have to start this review with the world-building because it’s the overarching backdrop on which everything else hangs. It’s absolutely incredible. Neal Shusterman created a masterful “utopian” society wherein death is (mostly) a distant memory from the Age of Mortality, a time when people killed and got sick and had accidents they couldn’t recover from. Sound familiar?

Science has brought this new world perfect health and a means to escape accidental death via ambidrones that pick up the “deadish” (recently dead via “splat” or whatever other accidental cause) and whisk them off to revival centers where they are put back together Humpty Dumpty style and returned to society within a few days, fresh as new. People now live hundreds of years by “turning the corner,” or resetting their bodies via some clever DNA manipulation to a younger age once they feel they’re ready to start over. To combat population explosions, leaders created scythes–grim reapers who “glean” people (kill them permanently) without bias or malice. Scythes have a quota of souls to take each year, and they’re governed by ten commandments.

There is no government; there are no leaders. The Thunderhead, which is basically God transformed into zeroes and ones, sees all and takes care of people without interfering in Scythe matters. The world is now a perfect place. The only thing left to fear is a Scythe knocking on your door.

The world’s set up alone was enough to make me swoon. SCYTHE has some of the best world-building I’ve ever encountered. I was in awe of the level of detail Shusterman put into it.

Citra and Rowan are typical teens, except for the fact that they’ve been hand-selected to be apprentices to a dude who kills people for a living, and he’s training them to do the same job.

Citra’s feisty and fiercely loyal to her family, especially her little brother Ben. In the beginning, Rowan is rather shy (“the lettuce,” as he and his one friend call the people no one seems to notice) and comes from a family that doesn’t seem to care too much about him.

If there is a weak link in this book (there’s not, in my opinion), I’d say it’s the character development for these two. They both have important arcs, but I didn’t connect with them on an emotional level until later in the story. In the opening chapters, they were fine–neither good nor bad. I just didn’t care that much about them. As the story progressed, however, I grew to like Citra and Rowan. I didn’t love them, but I liked them.

Scythe Farraday and Scythe Curie stole my heart, however. And even though I hated his guts, I also loved Scythe Goddard’s over-the-top flamboyance. He was a real piece of work, but I couldn’t look away from his dazzling charisma, as cheesy as it was. He was a rock star scythe.

Neal Shusterman is a master at conflict. He pits these two kids against each other from the start, despite them having obvious affection for one another. Two dogs, one bone = a wonder to behold in this book. Each chapter upped the stakes for Citra and Rowan, too. Just when things started going well or slowed down long enough for them to catch their breaths, SLAM! Something else hit them like a baseball bat, sending them out of the park to deal with a bigger baddie, a bigger challenge, a bigger tragedy. I’m in awe of Shusterman’s talent with his own blade made of words. They cut me to the bone. Throughout the story, I felt like I’d splatted several times myself and woken up in a revival center, only to find another threat waiting right around the corner. The last two parts in particular had my arm hairs exhausted from all the standing.

The ending was perfect, too. It tied up most of the loose ends whilst leaving the door open for the next book in the series. I predict THUNDERHEAD will take a very different turn from SCYTHE, and I can’t wait to see where the characters and world go from here.

Greg Tremblay’s narration irritated me a little at first, but as I listened more, I began to appreciate his style. He came across as rather emotionless, but I quickly realized there was a reason. His voice mirrored the society’s voice. In this new age where there was little to fear, thanks to nanites in everyone’s blood that dulled physical pain with opiates the second something hurt, and emo nanites (there may have been a different term for this, but I can’t remember) that artificially kept mental/emotional states stable, everything in this world is fine, just fine. I felt Tremblay’s voice acting reflected that state of “just fineness” perfectly.

SCYTHE was one of the best books I’ve ever read. I feel like I’ve been saying that a lot with the books I’ve been reviewing lately. I really hope someone makes a movie out of this one. I could picture the world and characters so vividly as I read, and I can’t stress enough how much the world-building and conflicts blew me away. I will definitely pick up THUNDERHEAD, the next book in the series and read it once I’ve had a chance to fully appreciate and digest the magic that was SCYTHE.

I bought a paperback copy for my thirteen-year-old daughter who loved THE HUNGER GAMES, HARRY POTTER, and THE GIVER. She read over 100 pages of SCYTHE on a school night, so I’m pretty sure she’s digging it as much as I did. 😄 Parents, if your child is a sensitive reader, you may want to tackle it first or buddy read with your kid. The gleanings aren’t super graphic, but they can be pretty shocking.

I recommend SCYTHE to readers who enjoy utopian/dystopian young adult stories with a killer punch. 😉

You can pick up SCYTHE on Amazon (universal link), Barnes & Noble, iTunes, and Kobo.