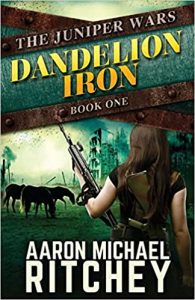 I read a book.

I don’t do that very often anymore, but once I started this one, I could not stop, which says a lot about the awesomeness of said book.

What speaks even more loudly is the fact that the book was WAY the hell outside my comfort zone and not one I would have normally picked up. I simply do not read young adult (too whiny), westerns (no interest whatsoever), or steampunk (pretty concept, but I need electricity in my life).

Until I read a YA dystopian post-apocalyptic steampunk sci-fi western by a sorely under-appreciated author named Aaron Michael Ritchey.

Full disclosure: I know Aaron personally. I had never read his work before because, quite frankly, I hate YA. He loves YA. We’re friends regardless. Also (don’t tell him this), I was afraid I wouldn’t like his writing. Shh …

DANDELION IRON was like nothing I’ve ever read before. I’m gonna do my best to break it down below without fangirling too hard, but I’m sure I’ll leave out tons of important stuff. If you have time (about 17-ish minutes) to listen to my surprise interview (complete with oodles of fangirling) with Aaron about the book, please check out this post.

War is hell, but the kind of war the Americans of 2058 endure is particularly nasty in that it results in a) the decimation of a lot of soldier man-dudes; b) a sterility epidemic that affects the few man-dudes who survive; c) a “knockout” that renders Colorado, New Mexico, Utah, Wyoming, and Montana electric wastelands, collectively called “the Juniper.” Thanks to a missile dropped on Yellowstone’s caldera that left a nasty, gaping EMP wound, not so much as a AAA battery works there, so steam and diesel are the blood that supplies everything in this literal no-man’s land.

Basically, the Juniper is totally phlucked.

But the rest of the country ambles on, wallowing in its technocracy-laden glory whilst its citizens are split down the middle on issues hauntingly familiar to us ancient folk stuck back in the 2010s. The conservatives try to push the New Morality Movement agenda down everyone’s throats, while the “liberal” ARK (American Reproductive Knowledge Initiative) supporters aim to preserve Homo sapiens via research and loads (I said “loads.” I crack me up!) of sperm clinics. The few “viable” boys and men who remain are often treated like objects, only good for what they can provide in the baby batter department, and I don’t mean for making pancakes or putting cribs together. The women of this time are perfectly capable of handling everything except procreation without help. Trust me.

Cavatica Weller: The story’s main squeeze. She’s seventeen. Smart. Gun shy. Devoted to her family, even though they drive her more than a little batty. Cavvy is the youngest of three cattle-pushing sisters. Their mama sent her to engineering school in The World (like, in Cleveland, Ohio where electricity still surges with the exuberance of fresh recruits reporting for duty) so she could one day be Somebody. Naturally, life throws her for a loop just as she’s getting comfortable at the Sally Browne Burke Academy for the Moral and Literate and catapults her home to the American outback with nothing but a big brain and a small case of anxiety every time a gun’s forced into her hand.

Sharlotte Weller: Big sister. Responsible. No nonsense. Hardened by years of working the farm in the Juniper. She needs Cavvy to come home and help navigate an impossible cattle drive to save the family land from the hands of Bad Dudes who aim to take everything. Six million dollars are at stake, so Sharlotte can be a little pushy at times.

June Mai Angel: An airship pirate who controls the Juniper from the dust bowl shadows. She commands a huge army of relentless ninja-like fighter chicks, and she ain’t afraid to cut ’em loose on anyone who stands in her way. June Mai always leaves one survivor so they can tell the world what she did. Oh, and her people eat their victims. Feet first. So they can watch while they’re being devoured. *Shiver*

Petal: Sino War survivor. Mean as a rattlesnake, deadly with a gun, yet fragile as a dandelion when she doesn’t have her medicine. Petal’s a great one to have on your side in a fight, but she’s trapped in her past, battling demons only she can see. A truly tragic figure. She also has a penchant for reciting twisted, thoroughly bad-ass versions of nursery rhymes in the middle of gun fights. I can’t wait to learn more about her in the upcoming books.

Micaiah: A viable, cute, but mysterious boy the sisters meet in the midst of their dangerous cattle drive. Cavvy falls for him. Not only does she have competition from someone close to her, but Micaiah is also not what he appears to be. He has four aunts who will stop at nothing to bring him home, and these women prove they’re even deadlier than June Mai Angel’s ninjas. Add to that his viability, and he becomes a li-ability to the family trying to escape attention. Or is he?

Pilate: Family friend. Catholic priest. Rake. Possible atheist. My favorite dude in the book. His morals are questionable, his actions are incorrigible, and his heart is as big as a supernova. He’s beautifully damaged, and I’m dying to see where his arc takes him. The irony of his name isn’t lost on me. In other, unrelated news, I want to marry Pilate.

Pilate was a carnival of a man, a close family friend, and a Catholic priest. Kind of. He’d been a chaplain in the Sino, but he said the war shot most of the holy out of him.

Including me. Love and hate— that was Pilate.

Wren: Middle sister. Gunslinger. Obsessive tooth-brusher. Alcoholic. Awesomest damn character in the book. She and Cavvy rarely get along, but they’re trying to make things work for the sake of the farm. However, just when Cavvy starts to whittle away at Wren’s iron-plated exterior, Wren insults, belittles, or humiliates her. She’s a study in contrasts–hard as diamond, but also a lost soul. Hides a well of shallow emotion inside her chest … filled with alcohol.

Here’s my favorite description of Wren:

Since Mama was always so busy with ranching, she put Sharlotte in charge of Wren’s and my hygiene— bathing, hair-combing, teeth-brushing, that kind of thing. Wren must’ve been around eight years old, and she liked her hair princess-long, but didn’t like anyone combing it. Sharlotte had to wrestle her down to brush out the tangles, and Wren would shriek and shriek.

After one such episode, Wren took Sharlotte’s Betty knife out of her room, went into the bathroom, and used it to cut off all her hair. Down to the scalp. Mama said blood and hair covered the bathroom, and there was Wren, grinning, bald and bleeding. She’d rather scalp herself than let Sharlotte comb out her tangles.

In other news, I’d also like to marry Wren.

After a devastating event forces Cavvy to return home, she has to decide whether to follow her two sisters across several states, pushing three thousand head of cattle through a wasteland with insane ninjas lurking in every corner, or lose their family home to a manipulative asshole who stacked the cattle deck against them.

That’s the short and sweet version, but there’s SO much more to the story. If you enjoy a fast-paced and totally unique story, DANDELION IRON is the book for you. Trust me. You need this book in your life. Young adult dystopian post-apocalyptic steampunk sci-fi western and all. 🙂

I love this book so much that I want to give away up to FIVE ebook copies to brave readers who are willing to try something outside their comfort zone. Leave a comment on this post about why you want to read DANDELION IRON, and I’ll randomly choose one winner for every ten comments (up to five maximum) to gift an Amazon copy of the book to.

This giveaway is open to anyone who can receive gifted ebooks through Amazon.com. I will contact the winners on June 10 using the emails provided on their comments. And if you don’t win, seriously, pick it up and give this book a shot at charming the pants off you. You won’t regret it!