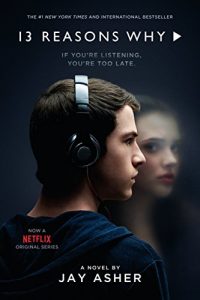 Some love the new Netflix sensation, 13 Reasons Why, based on the book of the same name by Jay Asher. Others feel it “legitimizes” teen suicide or focuses too much on the negative aspects of high school. As a parent of teens, I think it’s a story that needs to be shared. Below I’ll provide my 13 reasons why I loved the show and what it made me think about. (Mild spoilers ahead.)

DISCLAIMER: If you’re a parent of a teen who’s thinking about giving it a go, please consider viewing 13 Reasons Why on your own before letting your kid watch, or at the very least, watch it with them so you can talk about it.

Reason 1: Hannah. Her pain was mine. Her feeling of being lost, hopeless, subject to the whims of the sea of bitchiness and testosterone was mine. And it was yours. And my kids’. And everyone on the planet’s at some point or another. In a way, Hannah is all of us.

Reason 2: Clay. He was such a genuine, caring, beautiful character. He was kind and sweet, and even he found ways to blame himself for Hannah’s death. The difference was that though he didn’t see the signs along the way, he chose to do the right thing later. He might’ve been too late for this friend, but his experience has been forever changed because of the tragedy, and I would argue that he’ll be a better man for having faced it later.

Reason 3: Tony. Unhelpful Yoda. Jesus, I love this kid so much. He’s wise. He doesn’t push (though, he does gently nudge when nudging is required). He feels guilt, but he also sees the big picture and knows what he has to do to make things better for those Hannah left behind–Clay in particular.

Reason 4: Hannah’s parents. Their pain was my pain. They loved Hannah so much. They only wanted what was best for her. When they found her, I totally lost my shit. All I could think about was, “What if that was my child?” I love my kids like Hannah’s parents loved her. I could’ve been Hannah’s mom. The thought of that both devastated and lit a fire under me.

Reason 5: Drama. This show is proof that high school drama is a constant. The kinds of drama that unfolded on the show might not be exactly the same as what you or your kid experienced, but it probably follows similar veins. Self-centeredness. Dominance. Cliques. It’s all there, no matter where or when you live through it. As parents, we need to have meaningful discussions about those themes with our children.

Reason 6: Reality. People hurt. People can be mean. People can be thoughtless. That is a reality. Sometimes we take our hurt out on others, sometimes on ourselves, and sometimes, we just hold it in until it gets too big and there’s nowhere else for it to go but out into the universe in a massive, combustible form.

And sometimes the reality is realizing we made a mistake. Taking ownership of it. Making amends. A valuable takeaway from this show is remembering how to say, “I screwed up. I’m sorry.”

Reason 7: Fear. It’s easier to look away from something disturbing than it is to face it head-on. Humans are cowards. We’re afraid to deal in reality because the artificial is so much easier. If we don’t think about it or even look at it, it’ll go away. But it hasn’t always been like this, has it? We need to be better at standing up to bad shit when we see it happen or when we get the sense bad shit is on the horizon, but it hasn’t landed yet. Preventive measures aren’t always a cake walk, but they can be life-saving.

Reason 8: Selfishness. Like Hannah mentioned in an early episode, we’re so concerned with social media, with how we “look” to others, that many of us have forgotten how to be empathetic. We’re a nation of iGeneration (yes, even us older folks), self-centered citizens who can’t see beyond our own noses. We’ve lost our ability to connect with other humans on a humanistic level. If we paid attention to actual people rather than usernames and all the glitz and glamor that comes with them, our country–our world–would be so much kinder.

Reason 9: Truth. This show illustrates how relative the truth can be. Every character felt justified in their actions. Every character had her or his own truth to contend with, no matter how convoluted. Even Bryce’s truth was his own. Toward the end of the series, Tony said he knew Hannah’s truth, but he didn’t know Clay’s yet. That’s because Clay’s truth was still evolving. Truth has a sneaky way of doing that.

Reason 10: Second chances. There’s almost always an opportunity for a second chance. It may not be the one we hoped for, but it’s there in some form if you know where to look. Clay found his second chance. So did a lot of the other kids. But some of them didn’t, and maybe they never will. This show makes me want to look for second chances.

Reason 11: Life is messy. There is no universal way to deal with Bad Shit (TM) because life can go from being crystal clear in one moment, to so blurry, you can’t even make out shapes. Even black and white are a matter of perspective, aren’t they? Sometimes you have to shovel a lot of shit to get to the shit diamond underneath.

Reason 12: The need for genuine dialogue. Regardless of whether you liked 13 Reasons Why or not, I think it opens up an important dialogue. My son told me about the show. He’s fifteen. If ever there were a time to listen to a fifteen-year-old, it’s now. He hasn’t finished watching yet, but if he chooses to, I plan to discuss it with him. And even if he doesn’t, I’ll be having a talk with him about the issues presented. Who knows? This might be one of those second chances I mentioned above.

Reason 13. Depression is real. Hannah didn’t strike me as the “typical” depressed kid. She was a lot like I was in high school. She was the subject of rumors. She was called names, teased, labeled as something she wasn’t.

And she killed herself.

Depression is a malevolent beast, an expert at camouflage. I know because I live with it. And I hide it when it behooves me to do so. I’m not suicidal right now, but thoughts of ending my life have entered my mind many times. Would you have known that about me if I hadn’t typed it here for the world to see? Would you have guessed that just a few months ago, I contemplated ways to make myself disappear for good?

I’m a forty-seven-year-old woman who is depressed. I get help sometimes, but not always. Is this blog post my cry for help, or is it a plea for attention? How would you know if it were either?

If you’re depressed, please tell someone. Talk to your partner, your friend, your family, a doctor–just tell someone. Depression can be treatable, but, as with Hannah, if no one knows you’re having problems (or how serious the problems are), it’s hard for others to help.

BONUS reason 14: Hope. Like depression, hope also exists, even though you can’t see it. Hope hides out in the open sometimes. In the face of debilitating darkness, it can be hard to take at face value. Can this be real?

When you find hope, grab it and don’t let go.

13 Reasons Why forced me to pay attention. It saddened and angered me. It woke me up.

One piece of advice I’d offer after having seen this show is to reconnect with those you haven’t heard from in a while, and even those you have. Tell someone if you’re hurting. Watch 13 Reasons Why to learn why we need to be talking about 13 Reasons Why.